myNEB is an Alexa cloud-based voice service designed to help researchers and technicians with basic NEB scientific calculations and information while engaged with lab work. 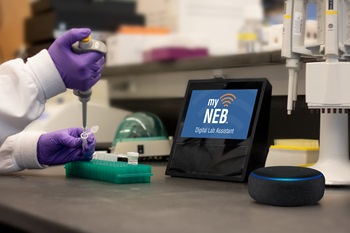 You are ready to start using myNEB! Visit the myNEB FAQ page for additional help.

Instructions for using myNEB on Alexa:

IMPORTANT: At this time, myNEB will only be able to provide answers and information on the content below (i.e. You will not be able to ask all types of scientific questions and expect answers).

A suggested command is included with each function:

Are you from the UK, Canada, India or Australia?